What is a cataract?

Simply put, a cataract is “turbidity” lens in the eye. The lens is located just behind the iris. It works in such a way that captures the images viewed, focuses the light, colors and shapes of objects appearing in the retina. Retina also sends images to the brain. Lentils may harden so much that the images are not light on the retina, and therefore perceive sharp images disguised. This is the reason why glasses or contact lenses, which have helped in the reading or when looking into the distance, already do not. In 90% of turbidity is a natural process caused by aging. Cataract is not a “film“, which overlaps the eye. It does not diet, or lasers. The best way to treat cataract is removed cloudy lens and replace it with new.

As the operation is performed by a modern gray cloud?

First, the eye made a small incision size of approximately 2 mm. Once injected into the eye with special viscoelastic solution that protects the delicate structures of the eye from damage. Removing cloudy core is made in principle in two ways:
Small incision in the eye surgeon inserted an ultrasonic probe. The probe tip size ballpen cloudy broken lens and the same probe, all the particles cloudy squeeze the lens of the eye. This process is called faco. 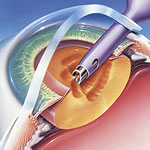 Disorders of the eye refraction:

A sense of dryness of eyes may involve different symptoms, which are the result of instability and lack of slzného film dampening eyes. May include stinging, burning, irritation, scratch or foreign body sensation in the eye. Emotions are experiencing dryness of eyes millions of people around the world.
What causes a feeling of dryness of eyes?
For its creation, many factors may contribute: